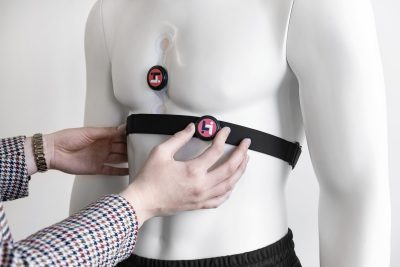 Can we better understand residents with misunderstood behavior if we have more insight into their build-up of stress? Dutch care organisation Philadelphia is investigating this in a pilot with biosensors. The Zwaluwnest in Sneek is one of the locations participating in the pilot. Hinke de Vries works here as a coordinating supervisor.

‘I first heard about the pilot in a team meeting,’ says Hinke. “It immediately triggered me for Jordy. The level of stress can quickly rise with him. Sometimes with aggressive behavior as a result.’ Due to his intellectual disability, Jordy himself is unable to think about this. Hinke discussed the possibility of participating in the pilot with his parents and a behavioral expert. “We explained to Jordy that this is a way to better guide him. And we made clear agreements. Jordy puts the sensors on himself in the morning and they go off again before he goes to sleep.’

We call the sensors used by Philadelphia biosensors. Sensors that measure certain body parameters when you wear them. The technique we use for this is the HUME system from Mentech. Jordy wears a sock and a chest strap with sensors. They measure his heart rate and the amount of sweat on his skin. This data is then analyzed and displayed in a smartphone application.

“His supervision plan states that we check on Jordy every ten minutes to assess how he is doing,” explains Hinke. “He doesn’t always like that. He sometimes says, “Let me go!” or “Are you there already?” Since he’s been wearing the biosensors, I’ve been able to see how he’s doing in the app. Does the app show green? Then he is relaxed. I walk past his room, but I don’t try to connect with him. That way I don’t bother him nearly as much.’

Does the app show orange (slightly stressed) or red (stressed)? Then Hinke is looking for a human connection. “When the stress level increases, Jordy needs closeness,” Hinke explains. “Is he really stressed? Then I will guide from the red traffic light in the HUME back to the green traffic light. That means that I give him simple commands so that he acts himself to regulate his stress. This helps him to get the stress out of his head and to calm down again. I can now also see that this method works for him via the HUME application. It then goes from red to a green traffic light.”

More time for other residents

The fact that she can now leave Jordy on his own a little more often ensures that Hinke can divide her attention better. “For example, if he has to do exercises for his back,” she says. “He has one exercise where he lies on the floor with his legs up for ten minutes. He then has headphones with music on. I often wondered how his stress level would change when I walk away from him. Now I see in the app that he is very relaxed. That’s one of those moments when I think: yes! I now know that he is relaxed, without me having to be around all the time. He has a moment to himself and I can spend my time with other residents.”

Hinke and her colleagues are very positive about the use of biosensors. “It’s a way to connect even better with a resident. To be able to support and guide him even better.’ Hinke thinks it is a pity that they have no insight into how Jordy is building up stress at night. “He often indicates in the morning that he has slept badly and has been grinding a lot,” she says. ‘I wonder if he is really stressed, or if it is mainly the negative thoughts that bother him.’ Together with Mentech, we are looking at whether there are ways to map this out.

nextUse of HUME for identification and regulation of pain